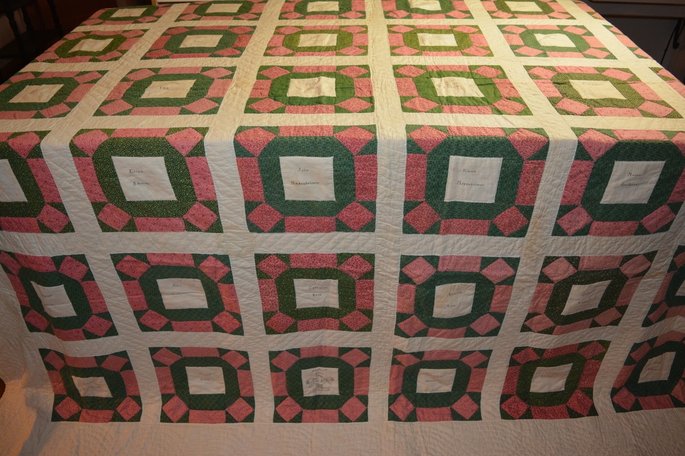 Signature techniques vary, some methods were used more often than others and over time, depending on the era in which the quilts were made, some previously popular techniques faded from use. Inked signatures have been the most popular through out the years and may be found in quilts of any age. Earlier blocks are sometimes signed or initialed in cross stitched lettering, and these cross stitched signatures can be found in quilts until about 1890. In quilts from the late 1800's and later, longhand signatures might be written by means of embroidery. About the turn of the 20th Century and thereafter, the signature is apt to be embroidered in colored thread. About 25 years ago, Friendship quilts began to enjoy renewed popularity and these quilts are still likely to be signed in embroidery, or with the newer ink pens which again promise to be non corrosive to fabrics.

While most signatures were written in longhand, some names were neatly hand printed on blocks. At other times the names were printed with small metal dyes or stamps with the quilt maker's name, in an ink and stamp method. Stenciled names can still be found on some mid 19th Century blocks. Women purchased metal stencils with their names cut in, and used them for writing their names on household linens and clothing or other needlework and they also used them to sign their quilt blocks. 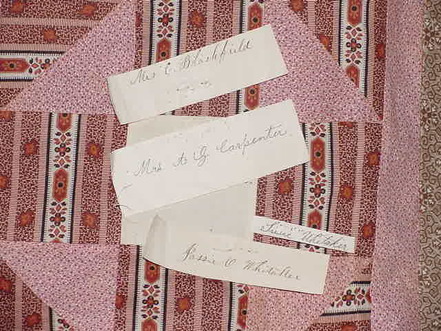 The makers of these blocks didn't sign the blocks themselves, but sent their signatures, so that names could be added to the blocks. Perhaps they were unsure of their penmanship and left the application of the names to someone else. Small slips of paper with signatures still readable, from this quilt, c1875.
Sometimes blocks were turned in without signatures, but the blocks would be accompanied with slips of paper signed by the block maker. Apparently the names were to be copied onto the quilt blocks by a more steady hand. Occasionally, a professional scriber added the names to the blocks, sometimes adding artwork along with the signatures. These are some of the most elaborately inscribed quilts, and are wonderful quilts to read and study.

Many quilt makers signed their blocks and added their own artwork done in ink, along with their signatures. Similar artwork can be seen in friendship album books of the 19th and early 20th century. Signers of these books often sketched in little illustrations next to their signatures. Others added elaborately inked frames for their signatures.

Most makers of early Album quilts were from affluent families, where the women would have had access to a fair amount of education. But what of the 19th Century quilt makers who had little education and didn't know how to write or sign their name? I have seen a quilt dated 1842 with squares marked with an inked X, and I have to wonder if these were "signatures" by those quilt makers who could not sign their name. Of course there is no way to be sure of that now, so many years after the quilt was made.
Friendship Quilts in recent years.

Today, Album quilts are made for the same reasons they were made a hundred or more years ago. Many are still made by the members of a guild or friendship groups, and often for the same reasons, as a gift to an honored recipient. Sometimes family members will make the bride a quilt as a wedding gift, or perhaps a new mother will receive a quilt for the new baby signed by family or friends. Church pastors are still given quilts made by the ladies of the church, and presidents of quilt guilds are often given quilts made by the guild members.

We have seen many Friendship groups being formed in recent years with the primary purpose of making Album quilt blocks. This is the Friendship group made up of 12 members that meets monthly, their chief goal, besides spending time with friends, is to make blocks for everyone in the group so that the members of the group each have a set of blocks at the end of the year. These groups continue to meet year after year, with people sometimes dropping out and new quilters joining. Over the years the friendships grow, and the women members become the closest of friends.

While there have been many groups in the past, who met regularly and made quilts for each other, generally speaking, they were not organized in quite the way the present day Friendship groups are, nor were they completely dedicated to this purpose of making Album or Friendship blocks. The previous groups usually met with the purpose of doing charity work of some type or another, but the generous spirit of these groups often lead to making a quilt for a friend when the opportunity or need arose. 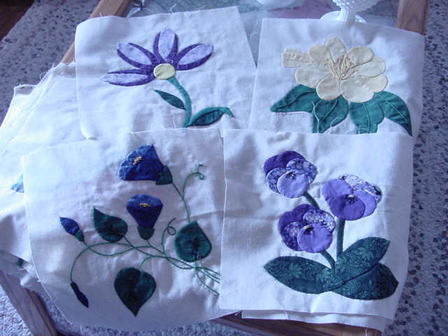 Blocks from a Friendship group that have yet to be sewn together.

The system most often used by these modern day Friendship groups is the "box" system. Each member of the group will choose a pattern and pick out her fabrics, and these, along with any directions needed, will be put into a box. These boxes will be carried to monthly meetings, and exchanged between members, to be taken home so the block can be made during the month, and returned with the box to the next month's meeting. At the end of the year the boxes will have traveled to each member of the group and returned to the owner with all of the blocks that were made during the year. Amusingly, this method, while sounding very simple, can lead to many lively discussions each month, regarding who has had this or that box already, and who takes which box with them this month. And of course someone who can't attend a meeting will have to get the box to the meeting or mail it to the next recipient in line for it, or she will hear about it next month! 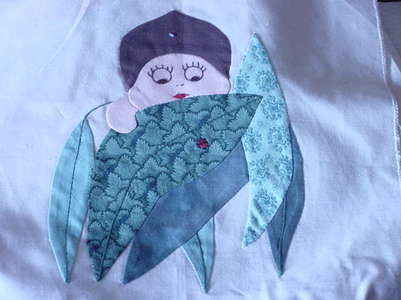 This block was made in a block exchange with an Australian quilter. Block shows an Australian fairy, or bush baby, called a Gumnut Baby.

A more organized system, in my opinion, is one where each member is assigned a month of the year, (usually the month that the group meets in her home) and she passes out a kit, containing the pattern and directions and often including fabrics, to all the members of the group at that time. The kits are taken home and the completed blocks are brought to the meeting the next month, and the owner will then have her set of blocks all done (theoretically that is, because life can interfere with the best of plans). At that same meeting another kit is passed out by the next person in line, and this continues through out the year, and again, at the end of the year, members have a set of blocks made by the group.

In another type of Friendship group the members of the group will decide on a common quilt project for the year. The group picks a quilt pattern, and fabrics are chosen or agreed upon, and the members will work on making these blocks during the year. All blocks are to be completed and exchanged with group members at the end of that year. This can also make for a lively meeting or two, while agreeing on a pattern and fabrics that everyone likes.

One of the joys of belonging to a quilt group or guild is taking part in the guilds projects. In one activity, called a Block Party, a pattern is handed out to the participants, the quilters make the quilt blocks, then all the blocks are gathered, and a name, or names, are drawn for the lucky winners of the blocks. The number of blocks won, depends on the number of blocks turned in. Blocks are usually kept simple to encourage participation. Many Album quilts have come from these Block Parties. 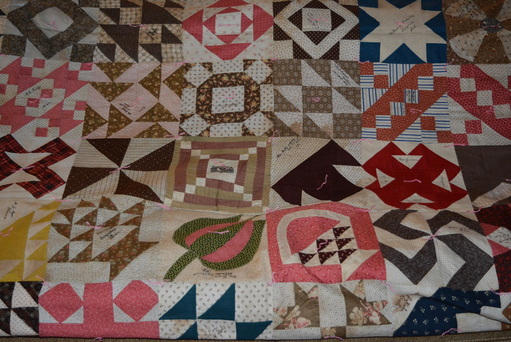 Sampler friendship quilt, c1890. Blocks were made by people from all over the country. One block is dated 1885.

Another type of Album quilt is made in a Round Robin. Blocks are made and mailed around the country. In the past willing participants were often found through requests in magazine ads and church groups, but today many round robins are organized through online quilt groups. In one type of round robin quilt, the quilt is actually made as it passes from one person to another, with each person adding a different element to the quilt, until it returns to the owner. 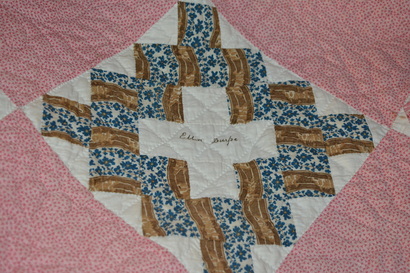 In this short and therefore in-comprehensive article on Album quilts, I have tried to explain the significant traits of these quilts, made by friends and family and given in friendship.

It has been more than 25 years since I saw my first Friendship quilt, and these wonderful textile artifacts continue to fascinate and endear themselves to me. Although I will never have the pleasure of meeting the ladies who made the older Friendship quilts I have come across, I can certainly still see their love and friendship, written and memorialized in cloth and thread forever, in these wonderful quilts called Album Quilts.


For more reading on Album quilts see the following books.
Clues in the Calico by Barbara Brackman, 1989, EPM Publications Inc.
Forget Me Not, A Gallery of Friendship and Album Quilts by Jane Bentley Kolter, 1985, The Main Street Press.
Remember Me, Women and Their Friendship Quilts by Linda Otto Lipsett, 1985, The Quilt Digest Press. 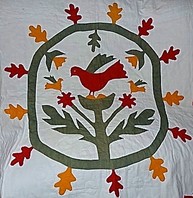