Where do quilt patterns get their names? 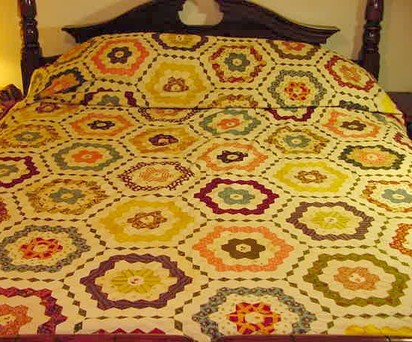 If these sound like terms from Scripture, you are correct, however they are also names for quilt patterns.

One of the most fascinating aspects about quilt collecting, study and history is discovering the association between quilts and the lives of the women who made them. We see the connection quite clearly by the names that quilt makers have given their quilt patterns.

It seems that every aspect of a woman’s life was honored with a quilt pattern name at one time or another. There are names signifying home and family life as well as names for the environment that the quilt maker lived in. Patterns can be found with names commemorating national and political events, religious beliefs, and even war heroes were not excluded from having a quilt pattern named after them.

The quilt names used in this article are names that are known, or are familiar to me, and probably not the only names for the patterns as most patterns have many names. 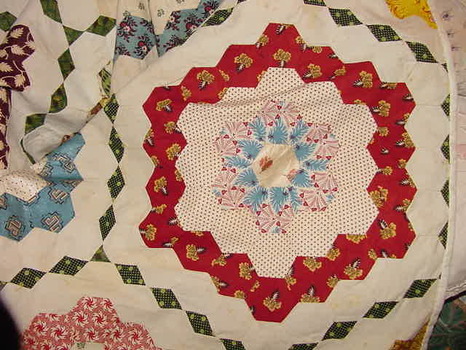 Honeycomb or Hexagon. Chintz quilt, c1830, made in an arrangement of hexagons and diamonds. See full quilt above.
Research done on the earliest quilt pattern names and where they originated, has not been overly successful.
There are quilt names mentioned in old diaries or journals kept by the women who made quilts. However, the few diaries that do mention a quilt by name, usually fail to describe the quilt or give any hint to what the pattern looked like (much less any type of drawing), leaving us to guess the pattern that the quilter is writing about.

The first known quilt pattern published in an American periodical was the honeycomb or hexagon pattern published by the Godey’s Lady’s Book in 1835. While we know that some early periodicals like Godey’s, featured patterns for quilt making they seldom gave names to these patterns, when describing a quilt or giving directions for making them. When they were named however, the names were usually descriptive, like the previously mentioned honeycomb (hexagons) pattern, and very often they were simply named “Patchwork”.

In the 1850’s Godey’s continued to publish quilt patterns for American quilt makers with a series of numbered but unnamed quilt patterns. Other mid century periodicals published patterns occasionally, and references to quilts and patterns appeared with increased frequency as the number of magazines increased in number. 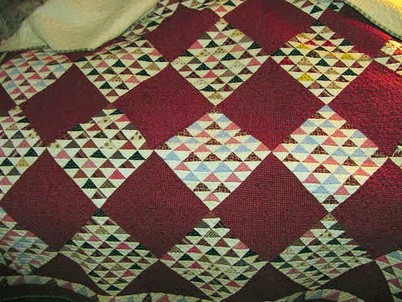 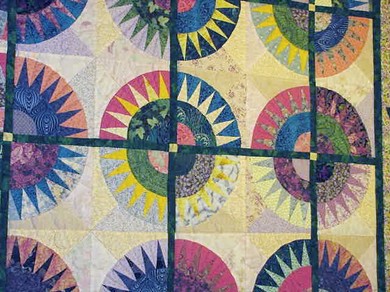 This is a modern version of the Crown of Thorns pattern, and is only one of many patterns with a Scriptural name.
During the next 50 years the number of patterns in print increased greatly with publications featuring these quilt columns and illustrating patterns submitted by readers and supplying new patterns on a regular basis. In the 1920’s the art of making quilts was embraced by a new generation, and the quilting revival of the 1920’s-1930’s was underway. Periodicals employed designers with art backgrounds to run quilt pattern columns and design new patterns. These quilt designers added a new 20th Century sophistication to the repertoire of patterns available to the quilter. It was also during this period that a cottage industry was born, with women selling quilt patterns and kits from their own home based businesses. The number of patterns available multiplied with the abundance of periodicals, newspapers and cottage industries selling quilt patterns. 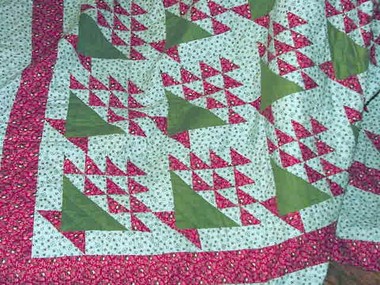 This is a Flower Basket quilt made in Pennsylvania, c1880. Basket patterns have many names.
While we would like to think that every pattern has a name, there are still patterns that have no proper name, and amusingly, many patterns have more than one name. This can be frustrating to a quilt owner who wants a proper name for her quilt. There have been several quilt historians who have endeavored to index the thousands of known quilt patterns and they have done an exceptional job of it. This indexing has also illustrated the fact that many patterns have several known names, and often these names are unrelated. Florence Peto states, in her book American Quilts and Coverlets, 1949, “ It is not wise to be didactic about the nomenclature of quilt patterns.” Barbara Brackman agrees with this statement in her own “Encyclopedia of Pieced Quilt Patterns”, where she states……”it is unwise to be didactic because the facts are very illusive. I now realize that not every pattern has a name, that there is no correct name for any design, and that some of the names we take for granted as authentic nineteenth century folklore actually have relatively short histories.”

Quilt pattern names reflect all aspects of life. Biblical names reflect the belief and conviction of the importance of a spiritual life, while more down to earth names like Hole in the Barn Door, reflect the environment that the quilt maker lived in. Quilt pattern names that reflect political issues are proof that women were interested in these issues, and that they were knowledgeable of current social events. While their voices may not have been heard at the time, their voices speak out from their work and remain for us to see today. Following are examples of the names quilt makers have given their patterns. 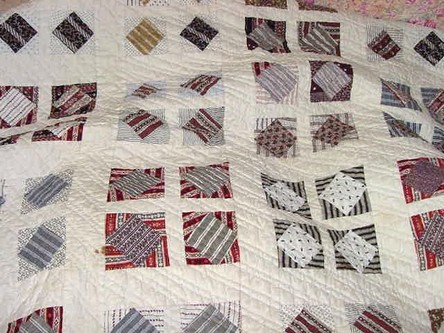 Another biblical quilt pattern name, Garden of Eden, in this quilt made c1890. 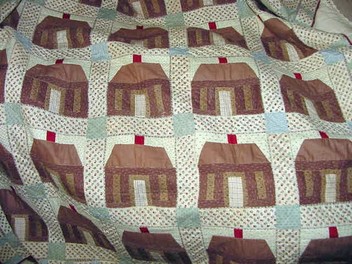 Many patterns depicted themes close to the heart. House patterns like this one are simply known for the things they depict. This quilt was made using fabrics c1840.

Biblical and Spiritual names include Job’s Tears, Hosanna, Palm Leaf, Bethlehem Star, Cathedral Window, Cross and Crown, Crown of Thorns, and those already mentioned Garden of Eden, Jacobs Ladder, and Josephs Coat, among many others. 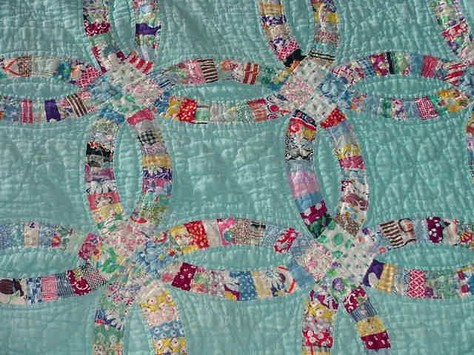 The Double Wedding Ring pattern is a 20th Century pattern very popular after the 1920's and still one of the most popular patterns, even though it's a bit more difficult to piece than most patterns. This quilt was made about 1950. 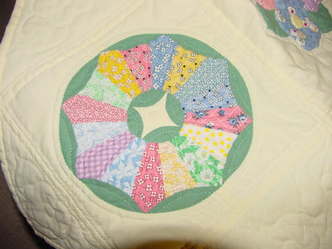 Some patterns were named after cities or states, with patterns like Boston Pavement, St. Louis Star, California Rose, New York Beauty, Carolina Lily, Ohio Star, Washington Pavement, and Arkansas Traveler. Every state has at least one pattern, and many have several. 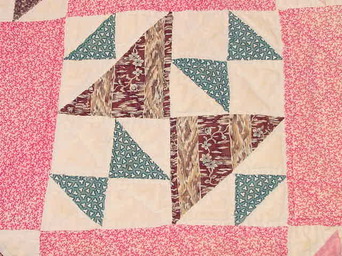 The Old Maids Puzzle pattern was used for this quilt, c1850, for an early version of this humorously named pattern.
It’s not known exactly how many quilt patterns and names are in existence today. Barbara Brackman in her 1993 book, the “Encyclopedia of Pieced Quilt patterns” features over 4000 different patterns. The same author in her book “Encyclopedia of Applique,” 1993, indexes another 1795 patterns.

Certainly the present quilting revival that began in the 1970’s (and is still going strong), with the great number of women and men teaching quiltmaking, writing books, and designing their own patterns will add greatly to the numbers. In addition, the new computer quilt design software, that enables the user to design blocks and quilts, will add significantly to the library of patterns available to today’s quilt maker. Looking back in 20 or more years it will be interesting to see what types of names quilt designers used during these years for their new quilt patterns. 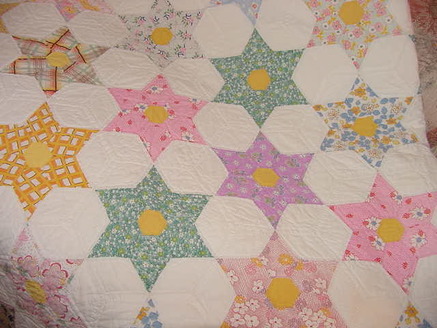 A 1930's quilt made in the Texas Star pattern, with beautiful fabrics from the era.
​Books
As noted above there are quilt historians who have researched and categorized thousands of quilt pattern names.  They've gone back through the oldest periodicals, books, diaries, and even old letters searching for illustrations of quilt patterns with names. They've drafted the patterns, sorted them into categories and supplied all the names they could find  associated with the patterns. As a rule these books don't supply workable patterns usable for quilt making, rather they are, as they state, encyclopedias or dictionaries of patterns with diagrams. Most of the block patterns will be duplicated in these stand alone books, but there are some differences. Some of the following books may be out of print presently, but they are available as used books easily found online or through libraries. Publishing information below.
​ 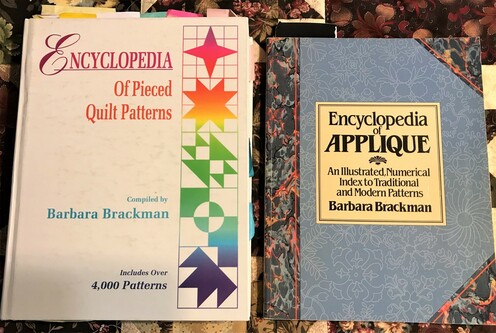 ​ The go to book for most quilt historians is Barbara Brackman's book, Encyclopedia of Pieced Quilt Patterns with over 4,000 pieced patterns (left in photo). Now out of print but available in ebook form, PDF,  from the publisher, at the American Quilter's Society webpage. 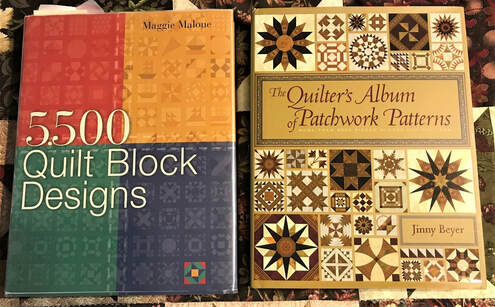 Maggie Malone has categorized 5,500 quilt patterns in her book 5,500 Quilt Block Designs (left in photo). Block diagrams are in color which can be a big help in identifying patterns, and equally helpful when making quilts. ​

​Jenny Beyers has written about quilt pattern names as well. Her book The Quilters Album of Patchwork Patterns (right in photo) has 4,050 quilt patterns. She provides pattern diagrams in color also. She includes a chapter on drafting patterns which is fundamental in quilt making. 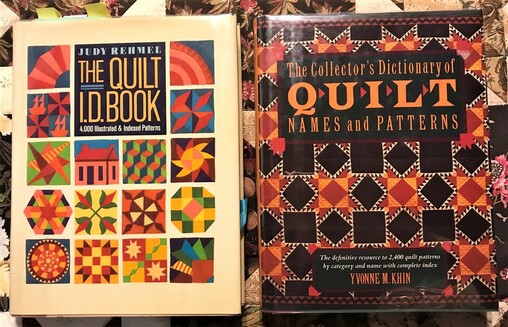 Judy Rehmel's book The Quilt I. D. Book (at left) is an old favorite. She has supplied diagrams for over 4,000 quilt patterns as well.


​Yvonne Khin's book The Collector's Dictionary of Quilt Names and Patterns (right) includes 2,400 pieced and appliqued patterns. A combination of the most commonly found patterns in one book.
Last Note:
I often receive questions on quilt pattern names. People want to know how a specific pattern name originated in the early days of quilt making.
Unfortunately there are no known records of names with illustrations of the patterns before the 1830's as I noted above. Without the illustration it's impossible to know what pattern is meant by just a name. If someone wrote in a diary "I worked on my star quilt today", we have no idea which star pattern she referred to without a sketch or photo of her quilt. Perhaps with the new information in old books, periodicals, newspaper articles and old diaries becoming available on the internet, quilt researchers will find some earlier references to quilts with names and illustrations.


​More publication information on the following indexes on quilt patterns and names: 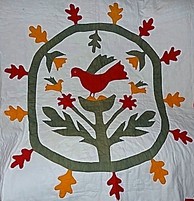